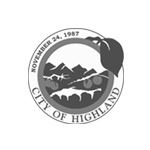 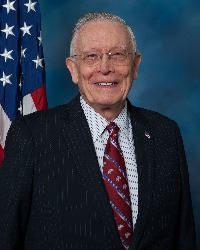 Larry McCallon was elected to the Highland City Council in November 2002. He is a retired local businessman with 18 years’ experience as President and CEO of McFAM Corporation dba McCLEANERS. Prior to retirement, he also directed multi-million dollar development, production, and maintenance programs at the Northrop Grumman Corporation for the navigation systems (star trackers) on the B-2 Stealth Bomber, the SR-71 Blackbird, and the U-2 aircraft.

He is a past President of the League of California Cities Inland Empire Division and has received its James Thalman Memorial Public Service Award. He is also Past President of the League’s Mayor and Council Members Department, served on the League’s Admin Services Policy Committee, and is a graduate of the League’s Mayors and Council Members Leadership in Action Program. He has been awarded a Leadership Fellow Certificate of Achievement in the National League of Cities (NLC) Leadership program and is a graduate of the SCAG Regional Leadership Academy at USC. He received a Good Government Award from the Building Industry Association (BIA) of Southern California for his leadership, while SCAG President, in the noteworthy development of a Southern California Economic Recovery and Job Creation Strategy. He received the Highland Area Chamber of Commerce’s Presidents Award in 1998, Business of the Year Award in 1999, and Member of the Year Award in 2000. He also received the 1999 Small Business Recognition Award from the San Bernardino County Board of Supervisors.

In 2005, the County Board of Supervisors appointed him to the San Bernardino County Indian Gaming Community Benefit Committee where he served as the Chair. Prior to his position on the Council, McCallon was a City of Highland Planning Commissioner, a member of the City’s Community Trails Committee, and served two terms as President of the Highland Area Chamber of Commerce.

McCallon served in the United States Air Force for 21 years and was awarded the Bronze Star medal during the Vietnam War.

In addition to his civic duties, McCallon is a member and trustee of Immanuel Baptist Church, and is very active in their Global Outreach projects both locally and around the world. From 2000 to 2006, he was on the Board of Directors of the Arrowhead United Way, and he served on their Planning and Allocation Committee. He is also a Past President of the Kiwanis Club of Highland.